No reserves. No Insurance.

What’s Left if a Natural Disaster Destroys a Community Association? 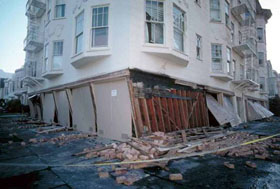 [14] Geology.com, “Sea Level Rise Map” http://geology.com/sea-level-rise/san-francisco.shtml
[15] San Jose Mercury News, Ibid.
[16] California Government Code Section 53395, et seq.
[17] A special district would usually be the choice if the facilities to be maintained include multiple new developments or community associations.
[18] In this case the district is called a “GHAD” or Geologic Hazard Abatement District and provides a vehicle for developers and cities to dispose of responsibility for unstable, and thus unusable, pieces of land left over from larger developments.
[19] Berding, “The Soft Story Problem and Earthquake Safety,” Ibid.
[20] Association of Bay Area Governments (ABAG,) “Expected Housing Losses in a Major Earthquake” 2002.
[21] My thanks to Fred Pilot and Evan McKenzie for providing me with this article.
[22] Chong, “Quake vulnerability of ‘soft-story’ apartments in state still widespread,” Los Angeles Times, January 17, 2009
[23] Ibid.
[24] http://www.timothycline.com/hoa/earthquakes.php
[25] Weil, Steven, “Community Association Decision-making: Who Decides?”
[26] FEMA, “Answers to Questions about the National Flood Insurance Program”
[27] Matteson, Thor: “Earthquake Retrofits: Solutions for Low-Rise, Wood-Framed Condominiums”
[28] Matteson, Thor: “Earthquake Insurance and Retrofit Choices for Condominiums”
[29] California Civil Code Section 1366(a).
[30] Berding, No Right to Refuse Payment, 2008.
[31] Berding and Bonato, “Bankruptcy Won’t Work”
[32] Berding, “Is Your Condo Development a Candidate for Sale as a Single Parcel?”
[33] The standard clause included by BerdingWeil in the CCRs that its attorneys prepare provides for alternate repair strategies to be presented to the members. But if none of the alternatives are accepted, the board of directors is given the authority to sell the property without a further vote.
[34] Berding, “The Uncertain Future of Community Associations” (2005)
Posted by Tyler Berding at 9:35 PM 9 comments:

Tyler Berding
I received my Ph.D. in Government from Claremont Graduate University and my law degree from the University of California, Davis. Berding|Weil has represented community associations for over 35 years. For more information, please call 925-838-2090, or email: tberding@berding-weil.com